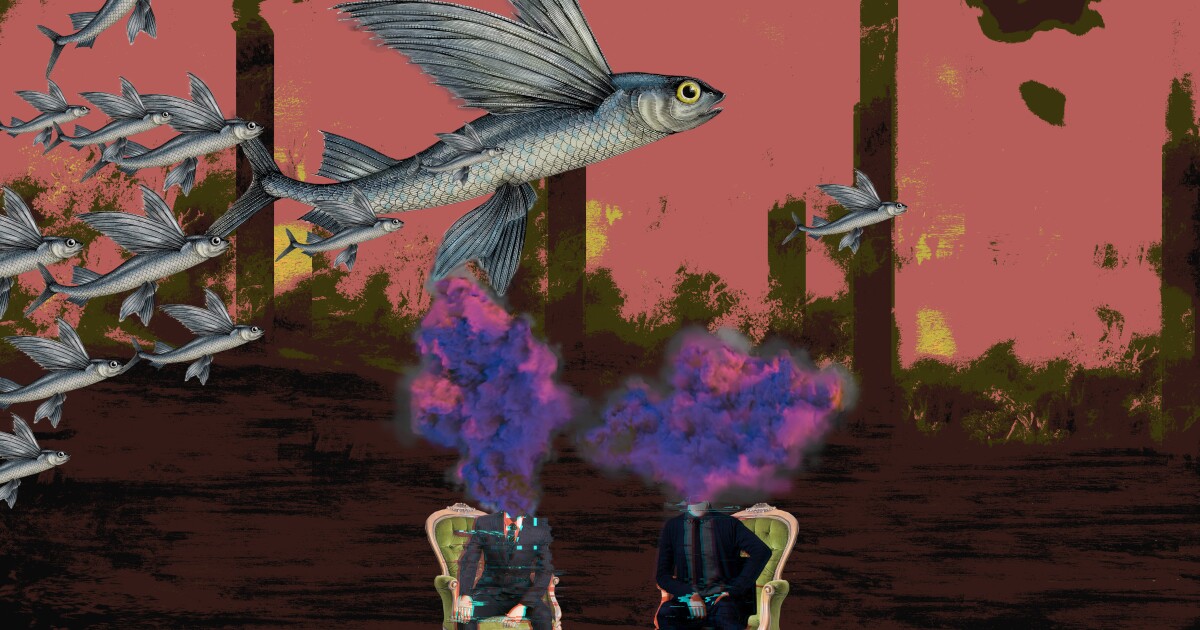 As a record-breaking heat wave hits the west coast and is attributed to climate change, a group of artists explore the subject in an art gallery in Santa Ana.

The Orange County Center for Contemporary Art has launched an international call for the exhibition “The Epiphany of the Anthropocene: Art and Climate Change”. The show centers on the Anthropocene, a period in which humans have a significant impact on Earth’s geology and ecosystems. The artists responded with work in all mediums – painting, drawing, collage, photography, sculpture, video, installations and fashion pieces.

Some describe the effects of pollution like artist Fatima Franks, who works with mixed digital collages. In “Pink Sky and the Flying Fish,” the Cal State graduate Fullerton illustrates the idea that capitalism and consumerism thrive while the planet suffers.

Two headless men in business suits and ties sit on Victorian style chairs in the foreground of the collage. While factories in the background pump out garbage and industrial smog. Franks describes the flying fish as a symbol of determination, hope and finding better results.

Los Angeles-based artist Catherine Bennaton also considers the apocalyptic aesthetic of the landscape in “Summer in Hades,” in which she paints an image of a fire in California.

Beverly Jacobs started out as a scientist. The artist now based in Irvine creates ceramic sculptures. “Topsy Turvy” is a sculpture made up of ceramic pieces stacked in a totem structure. It is topped with a ceramic piece that looks like a house. In the description of the sculpture, Jacobs wrote: “Humans have devastated our environment, causing severe climate change… What hit these houses? A hurricane? Cyclone? Rain soaked failure, oversaturated soil?

San Ramon-based artist Pallavi Sharma explores geopolitical issues in her work, often focusing on the cultural production and activism of Asian American women. “Beyond Rituals” is an installation of five rolls of toilet paper suspended above five lotas (brass pots) used by villagers to carry water for morning rituals in India.

In the description, Sharma wrote: “As the paper goes down through the lotas, it looks like flowing water; intends to launch a speech on the interrelation of cultural practices and its impact on ecology and consciously reflect on our choices and lifestyle.

Other artists capture ideas about mundane human experiences, nostalgia for nature, or environmentally friendly artistic practices like the use of recycled materials.

If you are going to
What: “The epiphany of the Anthropocene: art and climate change”
When: July 3 to August 21; Monday to Wednesday by appointment or Friday to Sunday from 12 p.m. to 5 p.m.
Or: OCCCA, 117 N. Sycamore, Santa Ana
Cost: Release
Info: www.occca.org

Support our coverage by becoming a digital subscriber.