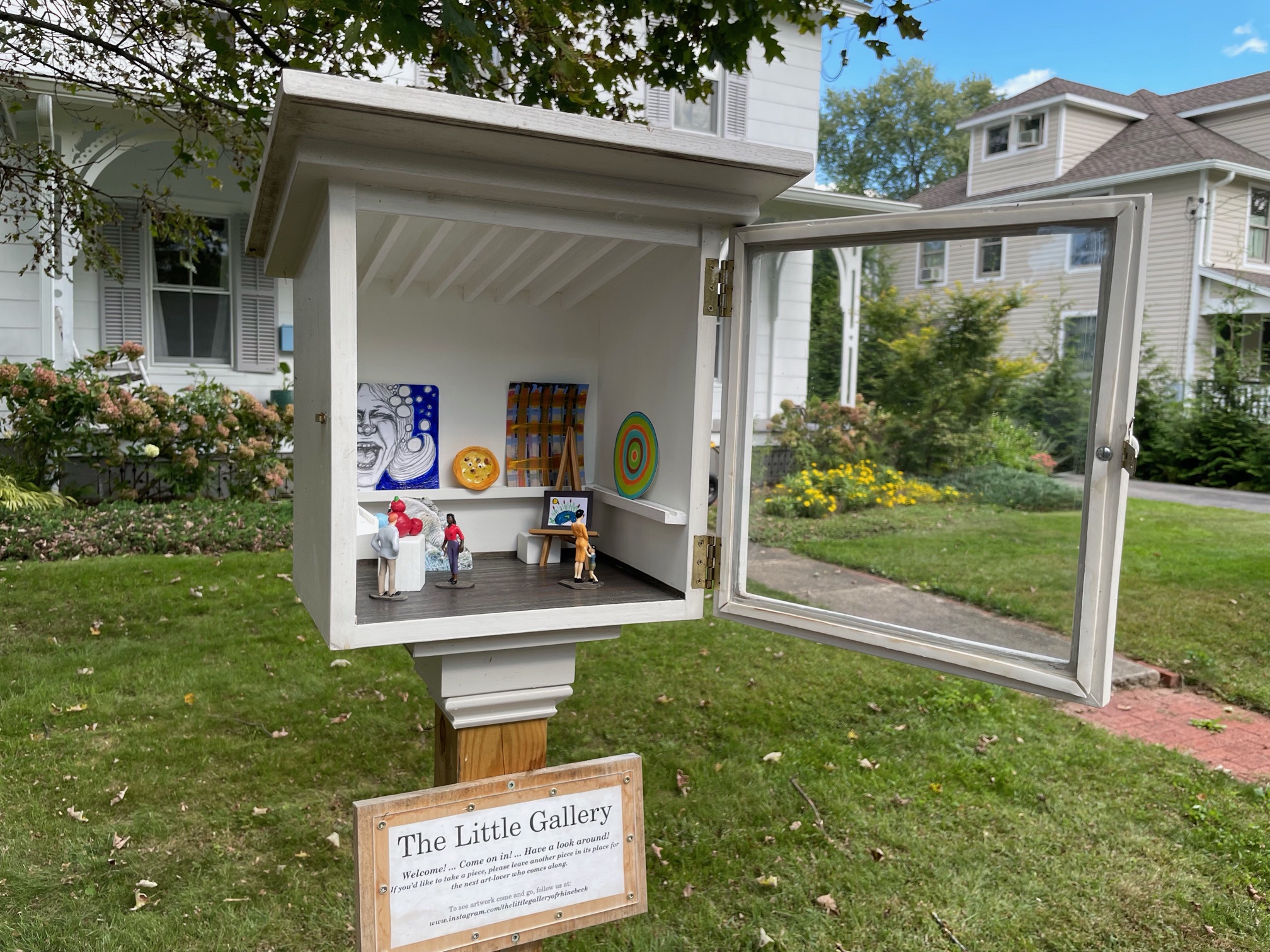 After nearly 34 years of marriage, Rhinebeck’s Tim Nuhn is struggling to come up with gift ideas for his wife, artist Audrey Francis. But last January, Francis casually mentioned a Washington Post article about a “little gallery” in Seattle that gave Nuhn a Valentine’s Day gift idea.

The story describes artist Stacy Milrany, who set up a wooden box on a five-foot post in front of her Seattle home, and called it a small, free art gallery. It works the same as the small free libraries in communities across the country where neighbors donate and take books from a small closed shelf mounted on a pole, except in this case people leave and take small works. art, or take a look inside.

Within weeks of installation, around 100 works of art had entered and exited the small gallery’s glass door, according to Milrany.

“I thought it was a great idea,” says Nuhn, carpenter and furniture maker. And so he set to work.

After a few sneaky nights in the basement, Nuhn emerged with a tiny wooden gallery measuring 10 inches deep, 13 inches wide, 17 inches high – tiny lovers of plastic figure galleries and all – and had it presented to Francis.

“There you have a gallery,” he said. He had also set up an Instagram page: @thelittlegalleryofrhinebeck.

The giveaway was a success, but it was February in Rhinebeck and the ground was frozen over. A few months later, the earth had thawed enough for Nuhn to set up the small gallery in front of their house at 59 Chestnut Street, a residential building a short walk from the Rhinebeck Mall. A sign hammered into the post offered instructions: “Welcome! … Come in! … Look around you! If you want to take one piece, leave another in its place for the next art lover who comes along.

Francis and Nuhn say they were a little worried about the reaction of their neighbors. But they didn’t need to be. “They love it,” says Francis. “People thank me. “

Works of art – paintings, drawings, even tiny ceramics – appeared in the box or arrived by mail, thanks to an address listed on their Instagram page. Some works are signed, others are anonymous.

A recent painting of a plant in a pink pot was sent from Washington State by artist Millie Brown. “I happily contribute art to small galleries all over the United States,” Brown wrote via Instagram post. “I love the concept so much and I draw everyday so it’s a great way for me to share my art in the hopes of inspiring others.”

Francis’ favorite submissions, she says, are made by local kids. Sometimes they contribute more than art – a girl made a small chair for the plastics in the gallery, and a group of children drew chalk lines around the neighborhood directing people to her.

Rhinebeck’s Little Gallery is one of the many smaller galleries that have sprung up recently. A quick Instagram search finds them in Exeter, New Hampshire; Washington DC; Grand Bend, Ontario; Mill Valley, California; Cedarville, Michigan; Adelaide, Australia and other places.

Darren Scala, owner of Yonkers-based D. Thomas Miniatures, believes their proliferation is directly linked to COVID-19. “No one had a place to go,” he says. “The little galleries are small and outside. It was born out of a need for contact.

Beyond the small galleries, Scala says interest in all miniatures has exploded. “It’s not just the elderly, the young have discovered it,” he says.

Last year, Scala appeared in a four-part HGTV reality TV series called “Biggest Little Christmas Showdown.” The highlight of the sale was a small portrait of Sainte-Cécile, which cost $ 4,800. A miniature tufted leather chair with matching ottoman was sold for $ 2,000.

In Rhinebeck, the small gallery is not without challenges. Francis found that most people leave art without taking art, forcing her to remove what she calls “extras” every few days. “One day, I’ll do an exhibition in a real gallery with all my extras,” she says.

“It’s kind of a liability,” agrees Nuhn, who says they check the gallery daily, take photos and post on Instagram. “There is pressure to keep it fresh. If he slows down, one of us will throw something.

Secondary contributors include their adult son and daughter, the husband of Francis’ sister, artist Cabeza de Vaca, and 90-year-old de Vaca’s mother, Alma, who draws at night to cope with her ailments and his pains.

But overall, the Little Gallery was a big success, not to mention a home run for Nuhn in the gift department.

“I like to make my wife smile,” he says.