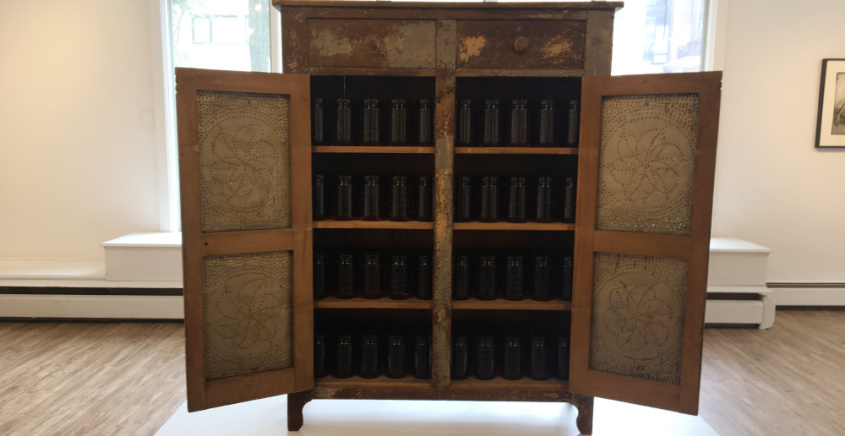 SARATOGA SPRINGS – A shabby cabinet filled with nostalgic scents draw viewers into “Brighten the Corners,” the latest exhibition to open at Saratoga Arts.

The antique pie cabinet includes 80 jars of brown perfume, each an interpretation of the scents of old books and records. The names of over 400 pie recipes are inscribed on each jar, evoking memories of fall family reunions and summer picnics.

Entitled “The Smell and Taste of Things Remain,” by Kate Ericson and Mel Ziegler, the play validates the historical significance of both nostalgic recipes and traces of books and records. This is perhaps the perfect starting point for the exhibition, which delves into some of the looming concerns of artists during the 1990s, many of which seem equally urgent some thirty years later. Organized as part of the Tang Teaching Museum’s All Together Now project, it features works by more than a dozen artists, all from the Tang collection.

One of the largest and perhaps the most brilliant works, Frank Moore’s “Sump”, spans much of an exhibition wall. Framed by copper pipes and a faucet, the canvas is filled with frogs and swimming fish, avoiding pipes that pump chemicals. The chemical clouds take the form of a phallus, the United States, and what looks like a dead fish. Each cloud reminds us of the destruction of the environment caused by the infrastructure and the tap reminds us that it is possible to slow it down or shut it down completely.

Nearby is a striking multimedia work by Tim Rollins and KOS (Kids of Survival), which features printed essays from Martin Luther King Jr.’s last public speech, under a coat of white paint divided by a large red triangle, the shade representing humanity.

The exhibition also addresses the AIDS epidemic with Donald Moffett’s “Mercy”, a photograph of a white rose mounted on a light box. The play was a call to action and a plea to support people living with AIDS. It is one of 100 that Moffett created and installed at the New Museum; each representing 100,000 people who have died of AIDS. The white rose has a purple tint around the edges, which makes the flower appear bruised, although the core remains pure white.

Another nearby meditative work reflects on environmental issues, giving viewers a bird’s eye view of a construction site, where a large black pipe sits above a dark gray landscape. In the installation, which rests on a rough worktable, tiny human figures are eclipsed by the pipeline and the desolate landscape. Created by Michael Ashkin and titled “No. 16”, it highlights the destruction caused by the energy industry. Although it was created over two decades ago, like many other works in the exhibition, it seems just as relevant.

In an adjacent exhibition, titled “Spirit Rappings,” artists from seemingly disparate backgrounds collaborate in sometimes odd ways. The title comes from the practice of communicating with spirits through a series of blows and blows, which have been interpreted by a medium. It started in western New York in the 1840s, with the rise of spiritualism.

Perhaps the most obvious reason for the title is the collaboration between Ben Gocker, an artist from Tupper Lake, and Helen Macro, a former artist from Tupper Lake who died in 2016. Gocker discovered Macro’s work after moving into his former House. Macro ran a basement clothing store and was a dedicated painter, leaving over 100 paintings at the local public library, where Gocker works.

He bought some of Macro’s paintings and used them to create assemblages with them. Gocker also used objects belonging to Macro, interweaving their stories and artistic ideas.

In one work, titled “From the Library Window”, a painting of Macro is placed at the center of a vast assemblage, made of woods, buttons and other pieces and bobs. In Macro’s painting a figure is seen in a hat and boots walking along a road and in Gocker’s assemblage a wooden hat and an abstract face are placed above the composition of Macro. Just below, Gocker placed two boots, with the words “Macro 1989”.

Later in the exhibition, Gocker places one of Macro’s paintings in a new context, forcing viewers to see it from a different perspective. In “This is the Siberian Husky” he turned over a rural landscape of Macros and placed a book of the same title at the center of the work. Brightly colored strips of wood frame the book and are covered with a white figure in the form of a fence.

The way Gocker recontextualizes Macro’s work undoubtedly alters his artistic heritage and could one day alter his. (One thing to note: a percentage of proceeds from Gocker / Macro works will go to supporting the Tupper Lake Public Library on Helen’s behalf.)

The other less spiritual but no less intriguing collaboration is that between Judy Glantzman and Jeffrey Hargrave. The first is a New York-based artist whose work is in the collections of the Whitney Art Museum at the Phoenix Art Museum. Hargrave also works in New York City and focuses on the portrayal of African Americans in traditional art history. His works have been exhibited at the Bronx Museum of Arts, among others.
During the pandemic, the two artists began to paint each other.

Striking portraits of both adult and child Hargrave stand alongside those of Glantzman. It is clear that during the collaboration they not only exchanged visual ideas but also stories and perspectives.

Elsewhere in the exhibition are drawings by Glantzman and paintings by Hargrave, such as an interpretation of “Olympia” by Édouard Manet, where the central figure is black. Nearby is also an interpretation of Manet’s “Luncheon on the Grass”, where Hargrave replaced the naked white female figure with a masked black figure. The works play with racially charged images and symbols, placing them in traditionally white contexts.

“Spirit Rappings” and “Brighten the Corners” will air through August 14 at Saratoga Arts. For more information, visit saratoga-arts.org.

More from The Daily Gazette: