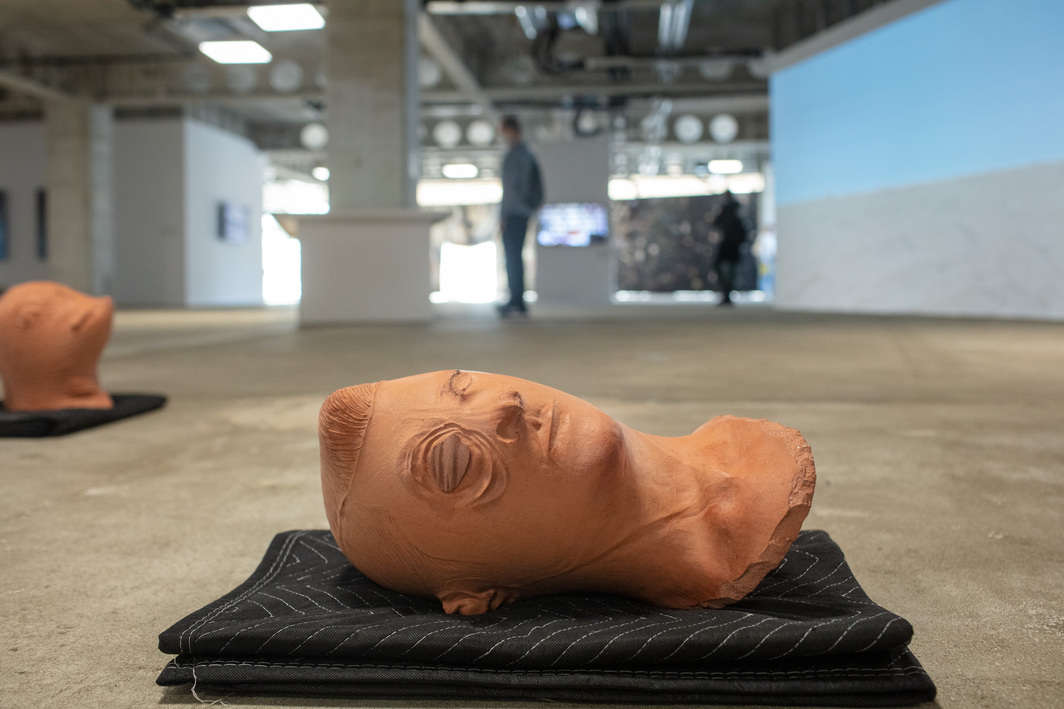 AUTUMN BREEZE struck in the last days of September, filling Timișoara with a chill blowing from its Eastern European neighbors. I walked past the ornate flaking facades lining the winding streets of Romania’s third largest city. A particular boost to biennials in small towns, in addition to being able to drink hot chocolate with the mayor (in this case, Dominic Samuel Fritz, 37, newly elected), is the invitation to slip into corners and nooks that otherwise go unnoticed.

Fortunately, the malleable premise of the fourth Art Encounters Biennale – an exploration of “the act of self-perception, whether individual or collective” – ​​may well fit into this melancholy meander. Entitled “Our Other Us” and running until November 7, the show scattered its offerings, many of which were shy and cryptic, across two main venues and various side shows across town. More than three decades after Romania’s emancipation from Nicolae Ceaușescu’s regime, Timișoara will become the European Capital of Culture in 2023 (the original plan, before the pandemic, was to crown the city this year). During the biennial breakfast, Mayor Fritz said that international efforts like a biennial “are redefining culture for social awareness, urban development and even transport where art is part of this ecosystem”. A loosely enforced lockdown as Covid cases escalated across the city barely clouded the mood for the vernissage, which was mostly shared by the local scene due to restricted airfares.

Kasia Redzisz from Tate Liverpool (soon to be artistic director of KANAL-Center Pompidou in Brussels) and independent Melbourne-based curator Mihnea Mircan each organized their own exhibitions: respectively, “How To Be Together” at the Corneliu Mikloși Public Transport Museum and “ Landscape in a Convex Mirror “on the ground floor of the brand new ISHO real estate development, owned by Biennial President Ovidiu Șandor. Although the rooms are only a five-minute walk from each other, the atmospheric gap between the two is striking and appropriate, given the opposing temperaments of the shows.

View of “How to be together”. Photo: Adrien Catu.

Redzisz, who organized his section in person, set up large, almost architectural firms on the rails of the defunct streetcar and under the high ceilings of the Communist-era streetcar depot. at Vlad Nanci Forum, 2021, a seating arrangement made up of fluted columns and chipped OSB panels from the walls of the 2017 edition in the same place offered a moment of rest a few steps from the installation of Nona Inescu, Sphagnum, 2021, which hid a glass replica of a local carnivorous sundew behind a pink curtain – a mysterious invitation to discover the dangerously charming spiky plant. Walking on the battered wooden floors, I felt like I was on a haunted stage, and Anna Hulačová’s concrete sculptures of ghostly workers could come to life in the blink of an eye.

In Mircan’s presentation, the physical absence of the curator (he organized the exhibition remotely from Melbourne) seemed to permeate the elegant and somewhat sterile venue. “I struggled with distance,” Mihcan later told me via WhatsApp. “This disorienting situation made polarizing perception possible. As the title suggests, mirroring was the key to Mircan’s business, filled with works that encourage viewers to double-watch, take it one step further, and watch again. Don’t be fooled by the cozy title of Jonathan van Doornum Dish towel holder, 2018. Aluminum, rubber, fabric, zipper and ambiguous metal thing is downright bizarre, with its curious juxtaposition of a blood-red thread attached to a thin metal rod. Approach with caution. Ditto for the sprawling two-headed sculpture by Zsófia Keresztes, The last bite, 2019. It is voluptuous and mercurial, the radiance of its surface reserves various surprises from near and far.

At the local cultural center Casa Artelor Later, I witnessed forty minutes of Catinca Malaimare’s three hour performance Amber Bastard Medium, a techno-sensual affair of mobile screens, LED lights and suspended chains. Dressed in a yellow jumpsuit, Malaimare rolled, tossed and spun while snuggling up with neon cords as we in the audience adjusted to being together again. Later, on my own, I went down to the Bega River, lined with mirabelle plum trees and people sitting on wooden benches. I had to get closer to the green pieces to measure their nature: still not ripe. I walked along the calm waterway looking for a bridge to cross Regina Maria Park. The river meandered, with no connection in sight on the other side. I gave up and opened Google Maps.

The artist Traian Cherecheș in front of his installation at ISHO.

Erika and Dragos Olea and Maria Farcas of DEVICE 22.

What Tuscaloosa Can Learn from Asheville, Part 2: Parks and Recreation

Celebrate fall with art, music and food at the Edom Art Festival!