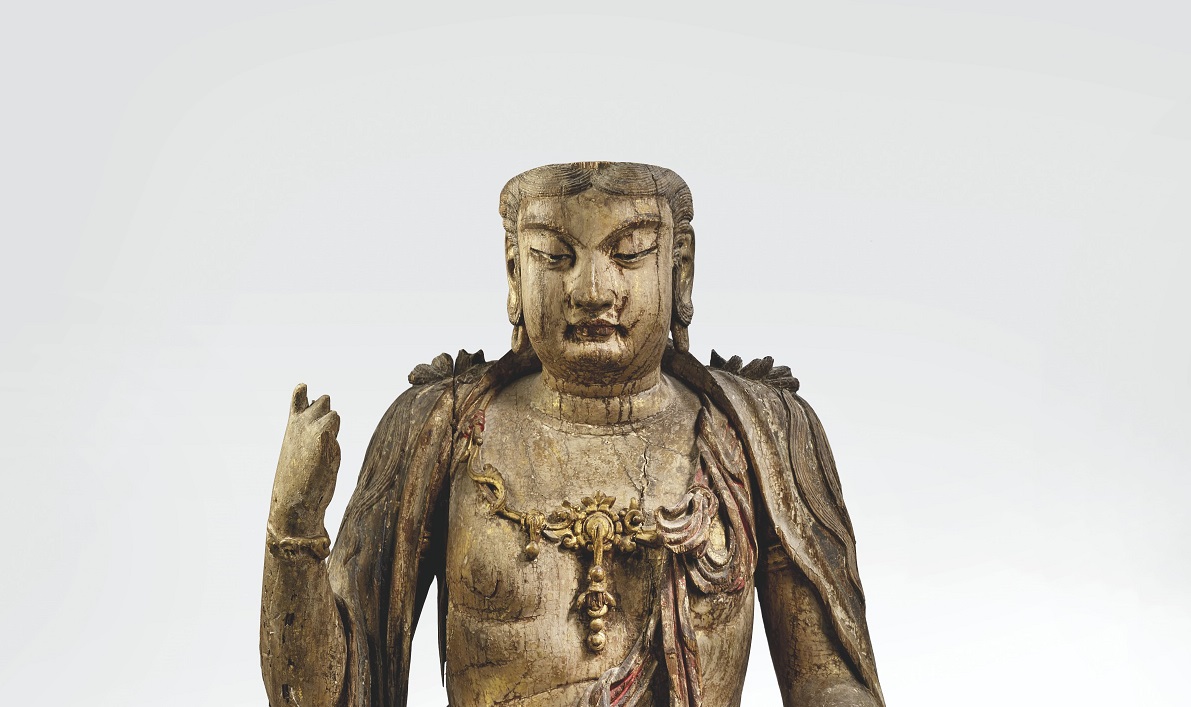 The Paris Asian Art Sale held at Christie’s June 9 reached a total of € 12,330,750 selling 92% in value. The flagship lot of the sale was a sculpture, a rare and important seated figure in polychrome wood of Guanyin which was sold for the impressive sum of € 2,900,000.

Tiphaine Nicoul, director of the Asian art department: “Despite the difficulty for Asian collectors to travel, we are happy to note that our spring sale is well anchored in the minds of collectors who have once again demonstrated, via the internet and by telephone, their constant appetite for rarity, quality and freshly released works of art, such as for an exquisite group of archaic jades once owned by Baron and Baroness von Oertzen and which made a combined total of € 455,000. We are also honored with the results obtained for a set of five splendid imperial vases from the collection of Walter and Phyllis Shorenstein which sold for € 475,000.

The auction was marked by exceptional results including a gilded bronze figure of the Medicine Buddha, Tibet, 15th century, sold for € 387,500 and a magnificent bell, impressive with its crisp cast iron decoration and sumptuous gilding, which was acquired for € 800,000, doubling its estimated presale price. Collectors were also attracted by a rare and important bronze tripod vessel with fabulous Taotie motifs (China, Shang dynasty, 12th-11th century) which sold three times its pre-sale estimate at € 920,000. Other highlights include a splendid cloisonne enamel vase and cover from a private European collection that sold for € 181,250.

Christie’s, the world’s leading art company, had auctions in the first half of 2019 totaling £ 2.2bn / $ 2.8bn. Christie’s is a name and a place that speaks of extraordinary art, unparalleled service and international expertise. Christie’s offers around 350 auctions per year in over 80 categories, including all areas of fine and decorative arts, jewelry, photography, collectibles, wine, and more. Prices range from $ 200 to over $ 100 million. Christie’s also has a long and successful history of private sales for clients in all categories, with an emphasis on postwar and contemporary, impressionist and modern, old masters and jewelry.